The Mark R. Lichtenberg Leadership Scholarship is awarded annually to one or more  brothers in Province 5 that has proven to live by the motto of “Go and Do” for the Fraternity. Intended to be awarded as a recognition for young leaders, the scholarship covers the cost of attendance and travel to the Fraternity’s Leadership Institute. In years where a Convention is held, the award amount is determined by Province 5 Leadership. 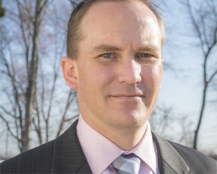 Mark R. Lichtenberg was initiated in 1993 by the Delta Nu Chapter and currently serves as Sinfonia’s National President for the 2018-2021 triennium. He served Province 5 as a two-term Collegiate Province Representative (1996-1998) and as Province Governor from 1998-2009. Before his election as National President in 2015 and reelection in 2018, Brother Lichtenberg served two consecutive terms as National Vice President, which were preceded by two consecutive terms as Chairman of the Province Governors Council and National Secretary-Treasurer. As a delegate at the past eight National Conventions, he has taken the initiative on numerous pieces of legislation to improve many aspects of our Fraternity, including the appointment and duties of Province Governors, the display and regulation of Fraternity symbols, and the restoration of the Object.

Beyond his official duties, Mark helped to develop the Mills Music Mission and is one of the primary authors of the Guide to Color Nights. His Comparative Study of the Initiation Rituals of Phi Mu Alpha Sinfonia Fraternity and work on the 2009 revision of the Initiation Ritual is an enormous contribution to the Fraternity’s body of knowledge. Brother Lichtenberg’s influence and teaching over the last decade has resulted in accuracy and consistency in the staging of the Ritual throughout the country and has improved fraternity education overall.